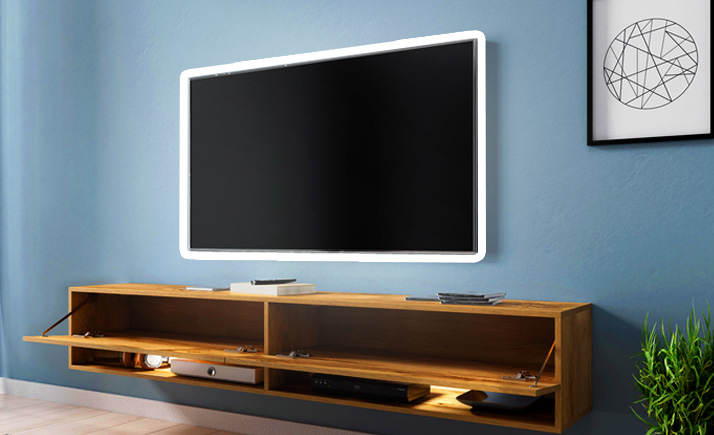 No Comments on 5 Benefits of Mounting Your Television on the WallPosted in Accessories, Installation methods By techwizzjoePosted on January 12, 2022January 28, 2022

As technology evolves, all electronic devices also undergo some major changes. Televisions are no different. You’ll find more elegant, brighter, dynamic, and bigger televisions today. They look entirely different from the televisions that were used a couple of decades ago. Many of us might also use certain accessories such as soundbars and game consoles with them.

All these accessories contribute towards a better viewing experience. However, the television and its accessories also take up a considerable amount of space in our homes. You might be among those individuals who have their televisions stationed on furniture.

This leads to a major problem of space, especially if the room is not spacious enough. By having your television mounted on the wall, you can get rid of all the space-related worries. There are other benefits too. Let’s go through some of them:

1. You’ll save some space

This is one of the most obvious benefits of mounting your television on the wall. By doing this, you don’t need more space in your living room or bedroom for its furniture. Since we all love to see more free space in our homes, this would be an excellent solution.

With the amount of space saved, you’ll also feel comfortable in the room. Your room with the wall-mounted television would look fresher and brighter.

2. You’ll save on furniture

There’s certainly a considerable amount of cost involved in buying furniture for your television. You can consider investing a much lesser amount in buying a television mount instead. You can have it installed on the wall and save a significant amount of space as well.

This space would otherwise be occupied by an expensive television stand. So, by getting a television mount installed on the wall, you save both money and space.

3. You won’t have glares from the lights

You might’ve experienced the problem of sunshine or the lighting of your room reflecting on the television. This might be a source of frustration for you, particularly when you’re watching your favourite show. You might try moving your television on the stand, but this can be risky.

In this process, the television might lose its balance and you can guess what might happen next. With a tilting or full-motion television mount, you can adjust the angle of your television. Thus, you can watch the shows of your choice without any worries.

4. Your television would be safe

It might be risky having a television placed on the stand if there are children and pets in the house. Kids have the habit of running around the room while playing. The pets are no different as they are constantly on the move while having their share of fun. A sudden hit on the television might result in some injury.

Your television might fall and break into pieces. The best solution, in this case, would be having the television mounted on the wall. It would keep the children, pets, and television safe from such untoward incidents.

5. Your health would be safeguarded

We use many different electronic gadgets and devices today. They’re designed to make our lives better. With their regular use, we’re also exposed to certain health problems. For example, watching television in a certain way can affect eyesight and cause body pains.

By mounting your television on the wall, you can get an ideal position for healthy viewing. You can adjust it to any position you want according to your comfort.